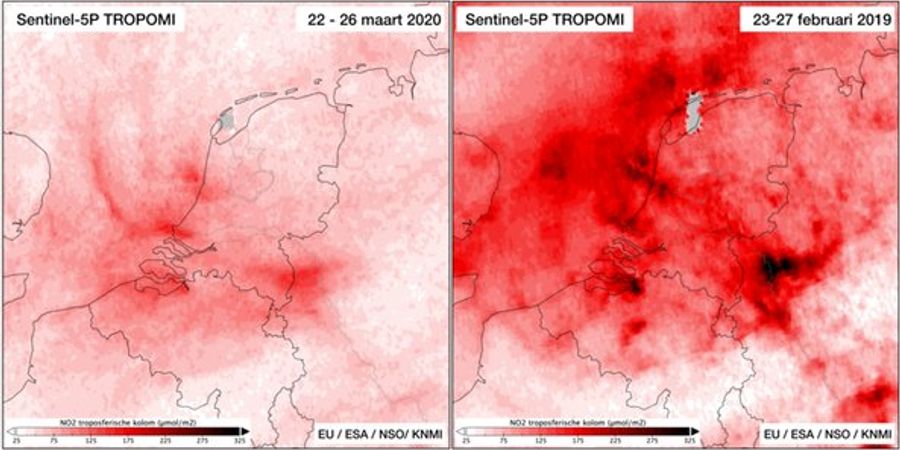 Impact Coronavirus on air pollution in The Netherlands

The Dutch weather institute KNMI made a comparison what the impact of working inside to prevent the Coronavirus from spreading has on the air quality in The Netherlands. They used comparable weather from the last week in February 2019 for this.

A week ago on the 20th of March I wrote a blog about the effects of the Coronavirus on the pollution in China and Venice. Today the Dutch weather institute has published the analyses on the impact of the measures on The Netherlands.

They start with their conclusion that the Dutch measures against COVID-19 make for less emitted pollutants. The estimation is that there is a decrease of 20 to 60 percent of pollutants above The Netherlands. Data for this estimation comes from the Dutch satellite Tropomi.

Starting on the 16th of March the government of The Netherlands put measures in place to decrease the speed of the spreading of COVID-19. The measures seem to lead to a strong decrease in people on the road, traveling by airplane and industrial activities. This also temporarily decreases the number of harmful substances, such as carbon dioxide and nitrogen dioxide.

Last week, from Sunday 22 March, was exceptionally sunny and dry, with a southeasterly wind through a large high-pressure area north of the Netherlands. The satellite cannot see through clouds, but due to the sunny weather, extra measurements could be taken this week. To minimize the impact of weather on the comparison, the KNMI compared March 22-26, 2020 to February 23-27, 2019 when it was also mostly cloudless in northwestern Europe with also a wind from the southeast.

NO2 concentrations vary widely from day to day, mainly because of the changes in the weather, but also, for example, due to changes in emissions. For example, emissions in the Netherlands on Sunday are much lower than during the week. It is therefore difficult to draw conclusions based on one-day measurements. By averaging the data over time, we lose some of this variability. The KNMI combined the data for different periods and compared them with the period for these measures and with the monthly average of March 2019.

The estimate of the reduction depends on exactly how the comparison is made and which period is chosen for the averaging. Therefore, the estimate based on these measurements alone is relatively uncertain for the Netherlands, with a margin of 20 to 60 percent.

Satellite measurements have been carried out for sixteen years by the OMI instrument, the predecessor of Tropomi. The comparison with this historical data shows how exceptional the current situation is.

The next step of the KNMI is to combine the satellite measurements of NO2 concentrations with measurements on the ground and with models describing atmospheric chemistry and meteorological variability. This combination allows them to better quantify the meteorological impact and make more precise estimates of changes in emissions.

If you'd like to keep track of the weather and air quality near your city, or any city in the world: download the Bowvie Weather app.