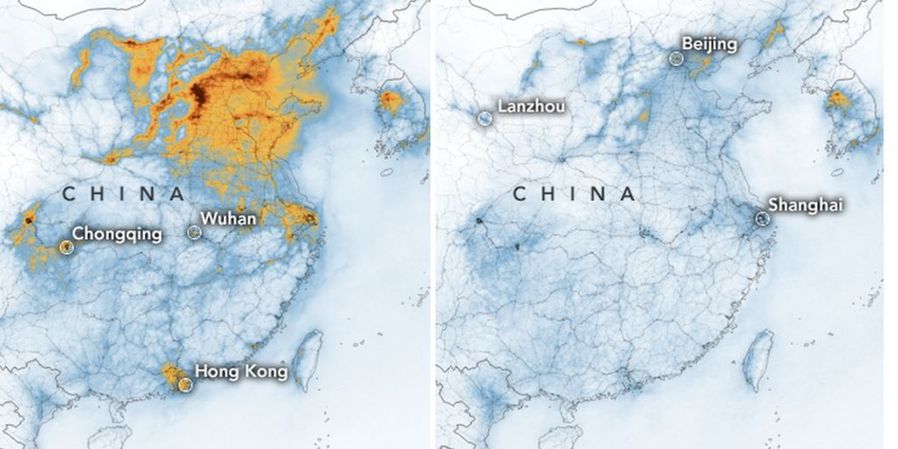 NASA's Earth Observatory images show "significant decreases" in air pollution over a few of the world's biggest cities. In addition to this Venice locals are showing clean canals which is something that hasn't happened ever before.

With the rise of COVID-19 in China at the beginning of this year, NASA's Earth Observatory began noticing drops in air pollution near a few of China's biggest cities like Shanghai and Beijing. In some places the drop in nitrogen dioxide was up to 50%. NASA reported this at the end of February on the 25th.

With the virus quickly spreading across the globe, about a week ago video's popped up from Venice locals that were showing of something none of them had ever seen before. To everyone's surprise they were able to see fish swim in the canals of Venice.

Now you might think this really impacts climates across the globe, but Pieter Boot, a Dutch scientist, says unless heavy industrial companies like Tata Steel start producing less the impact won't be significant. What also doesn't help is that while huge office buildings need less heating, this is being compensated by people who work from home turning on their heating.

Differences climate/air quality
The substances that make our air quality worse and affect our health are mainly nitrogen dioxide (NO2), ozone and particulate matter. Greenhouse gases such as CO2 lead to global warming. So these are different problems, but they are related, experts emphasize. Not only because burning fossil fuels leads to the emission of both, but also because NO2 itself also forms particulate matter, which in turn can have a (temporary) cooling effect.


What can you do

To mitigate the risk of COVID-19 spreading to you I collected a few tips & tricks you should follow:
- Stay at home as much as possible
- Regularly wash your hands with soap
- Sneeze and cough into your elbow
- Use paper towels
- Don't shake each other's hands

With the increasing pressure on health care, do not immediately call your doctor with minor complaints.

If you'd like to keep track of the weather and air quality near your city, or any city in the world: download the Bowvie Weather app.